Robyn Williams: And two women who did opt for science and, in a way, engineering, are Dr Tina Chowdhury, Queen Mary, University of London, and Dr Anna David from UCL. They are investigating why premature babies are made vulnerable by membranes that don’t heal when ruptured. The figures are quite boggling.

Anna David: Well, in the UK we have about 700,000 deliveries a year and about 50,000 of those babies are born preterm, so they are born less than 37 weeks, 40 weeks being a term pregnancy. Survival of preterm born babies is about 80%. So that’s about 20% of babies will die who are born preterm. So in the UK that’s probably about 10,000 babies a year. I would say there’s probably similar proportion of pregnancies in Australia. So one in nine pregnancies will deliver preterm. And the other thing is the cost as well. So the global cost of preterm birth is approximately US$15 billion a year.

Robyn Williams: And it’s caused by the fact that the packaging, the cling wrap does not heal if it’s punctured.

Robyn Williams: And this is where you come in, what have you found?

Tina Chowdhury: We’ve found a number of things. We now understand why the membranes don’t heal. Essentially this tissue is very, very well organised, there’s lots of stuff in it, there’s lots of cells, there’s lots of proteins called collagen which help to make this a three-dimensional structure. But as soon as you make a hole in this tissue, it doesn’t heal because the cells are not behaving correctly, they misbehave, they start to secrete this protein called connexin 43, and that tells the cell to stop working efficiently. So the cells don’t migrate properly, they cannot migrate to the wound edge and repair that tissue because they are dysfunctional. The other point is that the cells become embedded in this collagenous network all along the length of the wound edge. So they try to heal but they can’t, they fail because there is no correct signalling, there’s no communication between the cells and the collagenous network.

Robyn Williams: It’s as if they want the foetus somehow to die.

Tina Chowdhury: Well, they are doing their best, they’re trying but they don’t have the right functionality to allow the cells to heal. So we are trying to come up with ways to help the cells heal.

Robyn Williams: Any theories as to why you have that counterproductive effort?

Tina Chowdhury: Well, there are a number of reasons why the cells are failing and that’s because the tissue is being stretched. So the effect of stretching a foetal membrane tissue will have an impact on the cells’ behaviour. So we have this biological aspect where there are many proteins that can cause a cell to misbehave but we also have this mechanical aspect, the mechanical environment of that foetal membrane tissue where the hole is changes, and the signal from the mechanical response can actually be viewed as something not normal. And so that’s why the cell misbehaves.

Robyn Williams: Is there any way of inhibiting that protein that’s doing all the damage?

Tina Chowdhury: We have a number of ideas. We can use pharmacological agents to try and knock down the expression or change the way in which the cells produce the connexin. We can also use tools and technologies to try and influence the mechanotransduction process which is this effect of mechanical induced signalling in the cell.

Robyn Williams: It does sound rather like an example of unintelligent design, and I wonder whether humans are different because mammals have been around for such a long time, surely there are some creatures which do repair?

Anna David: Well, if you have a look at our small mammals like mice and also large mammals like sheep or horses, they do repair their membranes. It’s important to realise that the membranes are very, very clever. They are required to do something quite amazing which is to stretch and expand to accommodate the baby that goes from a few cells to something that is four kilograms, including the placenta. And then they have to rupture at a programmed time, they have to rupture at 37 weeks. So it’s not really surprising that biology sometimes gets it a bit wrong, and that if they rupture early, the process basically is not to heal it up because women need to go into labour, they need to deliver at 37 to 40 weeks and you wouldn’t want that pregnancy to continue beyond then because you’d find it very difficult to move about if your pregnancy carried on much longer.

Robyn Williams: So back in the old days, well, the first, say, 250,000 years of human existence it was better simply to cut your losses and go off to be able to breed another time rather than limp around vulnerable.

Anna David: Yes, in many ways if one is being ruthless about survival, if you have a pregnancy that ruptures the membranes early, and that baby is going to be born into an environment where it’s simply not going to survive or survives in a damaged way, in some ways it’s better to deliver the baby, save the mother’s life, get rid of the infection that might occur in the fluid around the baby and the mother’s womb and then move on to the next pregnancy. Of course nowadays we can help these babies very much. But it’s incredibly expensive.

Robyn Williams: Tell me, what measures have you got in mind to solve this problem?

Tina Chowdhury: There’s a number of things that we are trying to do. We are developing a combined technology, we are combining the pharmacological approach with the bioengineering approach in a way to try and help heal and repair these foetal membranes. So it’s very, very exciting for us.

Anna David: Well, I think the easiest approach would be to try to heal the membrane after they’ve been punctured during foetal surgery. So there are some babies that need to have treatment before birth. For instance, if they have twin complications, we can treat the problems of the placenta. And that requires putting a little telescope inside the womb and repairing the placenta. And of course that makes a hole in the membrane and that hole is about the size of a pencil and it doesn’t heal up. So the easiest approach first of all would be to try to heal up the membrane in a really easily approachable way by when you take out the telescope, by putting in some kind of plug that will work with the surrounding tissue to encourage the cells to migrate into that hole. So that’s the first approach we want to do. Of course it’s going to take a long time to do that because working…trying to develop drugs in pregnancy is incredibly difficult. 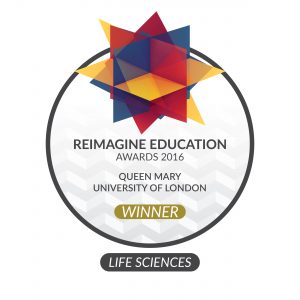 RT @QMUL: We're in the top 20 UK universities in the @worlduniranking 2021 and we've climbed 6 places to rank 35 in the @compuniguide leagu…
h J R
@ttchowdhury